Dividend Blog
You are here: Home / Dividend Blog / Investing / A Bank With A Great Dividend

A few weeks ago we covered a bank stock with a nice yield for savvy dividend investors. That stock was M&T Bank. Today, we have located another bank stocks with an absolutely fantastic yield .This bank has been a solid stock performer for years and has gone largely unnoticed by Wall Street. The company is United Bankshares (UBSI). 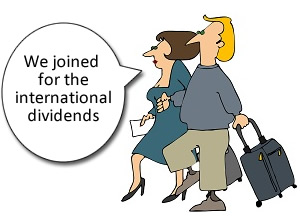 United Bankshares has been around forever serving its customers since 1839. The company has its corporate headquarters in both Washington D.C. and Charleston, West Virginia. United Bankshares has 112 offices on the eastern seaboard and holds $7.5 billion dollars in assets. It is one of the largest bank holding companies in the world.

As everyone knows, the banking industry is a competitive marketplace. Banks compete for consumer and institutional investor dollars. United Bank competes against regional banks such as BB&T, Huntington Bancshares, and Suntrust Inc. Despite stiff competition, United has held up rather well. United Bank’s revenue growth is 40% higher than the industry average and operating margins are 100% higher than competitors. Profit margin is excellent at 25%

The bank has been one of the top performing banks during the crisis. The company’s revenue and net income have remained high over the past few years making the stock a consistent member of the U.S. Select Dividend Index. The company has over $700 million dollars in cash and $1 billion dollars in debt.

United Bankshares asset quality has been consistently rated highly. The company’s Tier 1 ratio is outstanding at 12% and its risk based capital ratio is 13.4%. This is well above the 10% ratio that most banks have to be at in order to be considered well capitalized. Return on equity was high at 9% and return on asset was slightly below 1%.

The company’s stock trades at 16 times this year’s earnings. The P/E ratio is equal to the industry average of most banking institutions. Earnings are expected to grow at an 8% annual rate over the next few years. Shares currently trade at just 1.5 times book value. The stock trades at 2 times earnings growth and 4 times the company’s sales.

United Bankshares dividend is rock solid. The company just increased it dividend for the 37th consecutive year. That’s quite an impressive streak. Over the past 37 years, the dividend has increased from just 6 cents a share to its present value at $1.20. United’s shareholders have to love the 9% annual dividend growth rate.

The current dividend yield is 4.60% which is higher than the historical yield of 3.90%. The current payout ratio is 75%.United Bankshares is an appropriate stock for investors looking for a solid dividend stock whose dividend will continue to increase over the next few years.